In most cases, a good professional weld is thought to be stronger than a fastener. However, there are certain times when, to increase strength and reliability, an engineer may want to specify a connection made with welds and mechanical fasteners working together. In these cases, the members are secured with a fastener and then are welded to obtain the full connection strength.

This article explains how fasteners and welds can work together in a single joint, focusing on key factors that must be considered and design recommendations that should be considered.

It is helpful to begin with descriptions of the principal welding and fastening processes.

Stud welding is a general term for joining a metal stud or similar part to a workpiece using arc, resistance, friction or other process with or without external gas shielding.

The equipment required for stud welding is composed of the following:

The method used depends on the type of stud fastener needed, the application and the base metal the weld stud fastener will be welded to.

If working with a thicker parent material, one that is coated or rusted, or if requirements involve a larger diameter stud weld, then Arc Stud welding (SW)may be the best choice. The SW process joins a stud and another piece of metal together by heating both parts with an arc. The diameter of the stud being welded determines the pre-set current and weld times, which varies from 0.1 to 1.5 seconds.

These studs are manufactured from weldable material (as is the sheet material) and designed with a special arc stud tip; arc studs are typically loaded with an aluminum flux ball on the weld end to aid in the welding process. A pilot arc of electricity is generated and when triggered the weld gun lifts the stud to a pre-set height and the main arc is created, which causes the stud’s pointed weld end to melt.

Pressure on the weld gun pushes the stud into the molten pool to fuse the stud and metal sheet together. When the parts cool, the two parts are fused and the joint is complete. Arc stud welding produces a strong, one-sided weld. The welds are vibration-proof and resistant to breaking, loosening or weakening. Arc weld studs are commonly made from mild steel and stainless steel.

CD stud welding is a versatile single fastening process in which male and female fasteners can be joined to sheet metal with the weld cycle completed almost instantaneously (in milliseconds). In this process, the arc generated by the rapid discharge of electricity from a capacitor generates the necessary heat to bring the parent materials to their melting points. Pressure applied during or immediately after the discharge completes the joint. 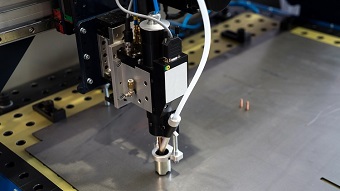 One advantage of capacitor-based welding is that it can weld studs to thin parent materials without thermally distorting or discoloring the panel surface opposite the studded side. With precise control of the time, current and pressure being used to create the weld, cosmetic damage to the side of the sheet metal that shows can be eliminated or reduced greatly.

CD welding works best on clean and flat parent materials such as mild steel, stainless steel and aluminum. The weld is not deep into the plate, so dissimilar metals can be welded without metallurgical problems. Fasteners used in CD welding are generally made from annealed C-1008 or C-1010 steels. Nonferrous fasteners can be made from magnesium-aluminum, silicon aluminum and austenitic steel (non-magnetic stainless steels that contain high levels of chromium and nickel and low levels of carbon).

Short cycle (SC) welding is based on the same principles as standard arc stud welding. The two main differences are that no ceramic ferrule is used to shield and protect the weld arc or to shape and contain the molten weld metal, and shorter times and higher amperages are used. Studs can be welded to a parent material in 10 to 100 milliseconds. Once again, the stud diameter determines the pre-set weld time and current in the SC process.

In projection welding, heat from the welder projections on the fastener fuses it with the surface of the metal base and forms a weld. Electronic controls on a press-type welder provide positive electrode alignment and equalizes welding pressures. Projection weld fasteners produce strong, precise welds by using two flat electrodes outfitted with projections to compress and fuse materials. Projection electrodes carry more current and weld thicker material than spot welding electrodes.

Fasteners in spot welding join directly to a sheet with either a rocker-arm or a press-type of welder. Here, current is sent through the entire area under the electrode to fuse the fastener and metal base together. While parts need to be portable because they must be taken to the welding machine, portable welders are not recommended. Low-carbon 1010 steel is the most commonly used material for spot welded fasteners.

Weld studs (weld bolts), nuts, screws and weld pins are the most common welded fasteners. Fasteners can also include rivets, washers, cap screws, straight tips, shanks, standard bent tips, backup tips, female caps and female shanks. Materials include all grades of mild steel, stainless steel, brass, bronze, gold, silver, nickel alloys and non-ferrous metals. Weld bolts or studs joined to a plate or sheet can eliminate the need for a through hole and/or additional tapping. By welding a nut over an existing hole, threads can be added without tapping them; this facilitates adding leveling jacks, adjustment members and clamps. In addition, the fabrication can be made with thinner sections. A nut can also be welded over a broken stud or bolt, enabling a wrench to turn and remove the stud.

Applications for combination weld fasteners can be found throughout the manufacturing, construction, appliance and automotive industries where fasteners need to form a stronger attachment to a sheet metal surface than what bolts, rivets or rivet nuts by themselves can achieve. Everything from trailers and conveyors to subassemblies, framework and weldments can benefit from the proper use of weld fasteners, as these tools can work with all items manufactured from steel or sheet metal. 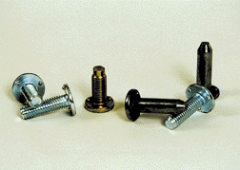 Figure 2: Threaded weld studs. Projection welding is especially useful for creating threaded fastening points on thick metal surfaces. Source: Elgin Fastener GroupFor example, nearly all elevators have a polished stainless steel switch panel without screws. One advantage in this application is that it includes no marking on the front face of the panel. The switch panel therefore looks pristine.

Similarly, at the junction of a highway and a bridge there is a metal plate (an expansion joint) on either side of the gap. Since reliability and a long operational life is essential, it is weld studded so that the bridge doesn’t buckle due to changes in weather or temperature.

Stud welds are used to assemble many vehicles — everything from automobiles to aircraft to trains. Again, it is a single-side fastener and strong, so the joint is extremely secure and practically invisible to the eye.

Welds are sometimes added to bolted connections in repair applications to increase strength and reliability. Welded connections are stiff and rigid. Unlike tightened bolted joints that may slip as they are loaded, welds are not expected to stretch and distribute the applied load. When welds and mechanical fasteners are used together, load is transferred through the part with the greater stiffness; that means the weld can carry almost all the load.

The orientation of the welds and the bearing condition of the bolts are two key factors that must be considered when determining the extent of load sharing in combination joints. Research has shown that when the weld-to-bolt strength ratio (the ratio of the design value of the weld joints to the bolt joints' bearing capacity) is about 1.0, the welds and bolts in the combined connection can work together with good performance. With the increasing weld-to-bolt strength ratio, the load share of the bolts decreases.

When two or more types of fasteners share the load, it may seem contra-intuitive but one cannot simply combine the ultimate strength of each individual fastener type. Similarly, determining the connection's total load capacity is not as simple as adding together the sum of the individual components — the welds, bolts and rivets. Such an assumption can lead to unintended — and unwanted — consequences.

What the code says

In terms of the appropriate code, the issue of mixing mechanical fasteners and welds is addressed in the American Welding Society (AWS) D1. 1:2020 Structural Welding Code — Steel. There, subclause 4.7.7 states that connections welded to one member and bolted or riveted to the other are allowed. When bolts and welds share the load on a common faying surface, strain compatibility between the bolts and welds must be considered.

Subclause 11.4.7 of the same standard states that when design calculations show rivets or bolts will be overstressed by a new total load, only existing dead load should be assigned to the fasteners. If rivets or bolts are overstressed by dead load alone or are subject to cyclic loading, then sufficient base metal and welding should be added to support the total load.