Editor's Note: Word came Dec. 5, 2019 of the death of George J. Lauer at the age of 94. A former IBM engineer, he played an instrumental role in the development of bar codes. Here, we reprise a 2017 article that looked at Lauer's role in that landmark technology that continues to shape supply chain innovation.

It's hard for us to envision a world with bar codes (also written as one word, barcode), those multi-width stripes on the corner of almost everything we buy or handle.

For consumers, they have sped up checkout and made price tags all but superfluous. But their impact on the supply chain across all industries has been far deeper and more transformative than spending less time at the supermarket.

Bar code systems allow tracking to occur every stage of production, through shipping, and to final sale. They allow real-time inventory updates and feedback into the supply chain as to what's selling and what's not, what's running low on the shelves, and what's languishing.

It's not just for groceries and the Universal Product Code (UPC), of course, although that is what drove their development. Retailers of blue jeans, for example, use bar code data to close the feedback loop and initiate factory reorders. And factories that manufacturer large industrial products use them to internally track constituent parts and sub-assemblies. 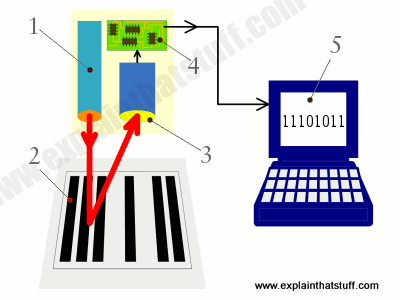 A bar code system: a light source illuminates the bars. A photo-scanner sees the reflections and decodes the lines, then passes the data to the computer and database. Credit: ExplainThatStuffBar codes have eliminated the costly and time-consuming process of manually going to the shelves and counting how many jars of peanut butter are there. Bar codes have even had an unexpected effect: because it is so easy to track products and their stock status, they have encouraged product proliferation with dozens of variants of a given product (think shampoo or toothpaste).

Unlike many innovations, the idea of bar codes was not one where potential users had to be convinced that they needed this better mousetrap. Instead, the incentive included formal and informal pleas by supermarket retailers for a better system of inventory control and checkout.

Although success seemed easy – just combine printing of lines, a scanner, a computer to look up the data, and it's done – reality was quite different. Turning those pleas into a successful system took not only technical insight into the basics of printing lines on a wide range of packages, but also the invention of a suitable illumination source (the laser), small, low-cost computers, and agreement on a standard for the code format.

The first bar code installation and use in a supermarket took place on June 26, 1974. That was when a package of gum with the Universal Product Code (UPC) was scanned at the checkout of Marsh Supermarket in Troy, Ohio, by one of its managers who used a system provided by National Cash Register (NCR) Corp. The fully publicized and reported event was not just a public-relations stunt; the setting was a real, full-scale setup and installation. 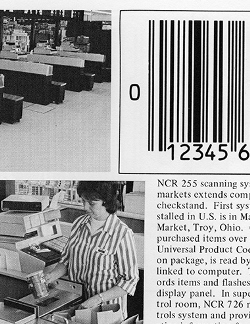 (Click to enlarge) The first commercial use of a bar code scanner was at a supermarket in Ohio and was fully publicized and recorded. Credit: Yale University PressThe origin of the bar-code concept is credited to N. Joseph Woodland, an inventor and engineering graduate of Drexel Institute of Technology in Philadelphia. He heard about supermarkets' need via a circuitous route: local supermarket manager to a Drexel dean to graduate student Bernard Silver and finally to Woodland. Woodland decided to work on the problem and self-funded the effort, cashing in some stock and moving to a small apartment in Miami. 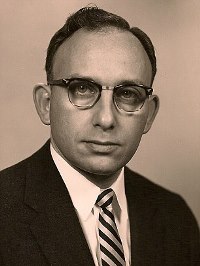 N. Joseph WoodlandIt was there, he recalled, that he had his flash of insight: instead of letters or special symbols, why not use an on/off pattern similar to Morse code. But instead of using dots and dashes, use narrow and wide lines? He also decided that printing them in a circle as a bull's eye pattern would ease reading them from any angle.

He and Silver had become partners in the project, and they applied for a patent on the bar code itself and the entire scanning system in 1949; Patent 2,612,994 was granted in 1952. 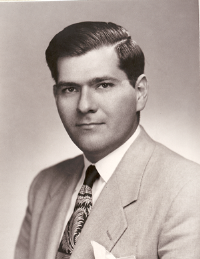 Bernard SilverStill, practical systems were a long way off, as there was no suitable scanning system (Woodland and Silver used a 500-W bulb for illumination in their prototype, and an oscilloscope to "read" the scanned code), and a suitable minicomputer system did not yet exist (they were room-sized, power-hungry installations used almost entirely for numeric calculations, not for other tasks). As a result, the project languished, and Woodland went to work for IBM on other projects.

When Theodore Maiman of Hughes Research Laboratories publicly demonstrated the first optical "maser" which was soon called a laser (an acronym for Light Amplification by Stimulated Emission of Radiation) in New York in 1960, the press coverage suggested that it was primarily a potential "death ray" but also "a solution looking for a problem to solve."

Yet the laser was a part of the solution to the problem of a developing a practical bar code system. A large box with laser-based source and scanning-mirror assembly could comprise the front end of a possible system.

Woodland's original concept for the bar code used concentric circles, which he anticipated would be easier to scan regardless of orientation. Credit: UPC History – ID History MuseumBy the 1960s, pressure to solve the so-called "supermarket" problem increased, especially with advances in computer hardware, availability of database-driven applications packages, and associated expectations for productivity gains. Many companies were looking to provide solutions, among them industry giants RCA (Reference 2) and IBM.

One of the impediments was the need for standardization of the bar code design and the data format which the code represented, and how products would be "registered" into the system. An industry-wide consortium composed of technology vendors, producers of packaged foods, and supermarket chains was formed in the late 1960s, informally called the Ad Hoc Committee of the Universal Product Identification Code.

Despite the common goal, it took four years to agree to reach final agreement. Individual participants had their own priorities and concerns, along with some "not invented here" issues. There were concerns about finding label space for the code block (some vendors did not want to give up package "real estate" for the printed code, or disliked the visual look.

There were even problems with printing technology itself. It was difficult to achieve consistent quality when printing the bull's-eye code (about 1? inches wide) on the many types of package labels, as it required maintaining line width and minimizing bleeding to avoid scan-read errors. Further, committee members were concerned about the post-printing effect of dirt, finger smudges, and creases.

From Standard to Adoption

The committee's final set of requirements was that the code could occupy only 1.5 square inches, needed to only encode 10 digits (recently expanded to 12 digits), be readable at high speed in any direction, and have only one undetected error in 20,000 readings.

RCA demonstrated a working system using bull's eye codes, and was presumed to be the leading contender for setting the code standard and defining the overall system.

George LauerEven so, IBM won the final design, with its proposal of straight lines rather than the bull's eye pattern and using a line-position coding scheme, Reference 3. This was due to efforts of engineer George Laurer, who knew that circles easily smeared in many high-speed presses (Reference 4).

IBM was able to demonstrate a system which read packages without error even when they were pitched across the laser-based scanning system at high speed at random orientations. In 1973, the committee formally approved the first bar code format. Since then, many other standard formats have been adopted, with different aspect ratios, number of digits, and shapes.

K-Mart was the first major retailer to install a system, and was soon followed other retailers. Although it is hard to put a price on the per-checkout cost, some estimates were that a laser source and scanner alone cost around $5,000 per aisle in late-1970's dollars; despite this fairly steep price, the return on investment was both positive and rapid.

The original bar code standard supported 10 digits, with each digit coded as a set of lines in a specific field reserved for that digit, as well as a checksum and framing lines; the wider lines are actually the combination of multiple thin lines within a given digit's field. Credit: Simply BarcodesAs has often been the case, there was a mutually beneficial relationship between system vendors and users. Demand drove technology vendors to develop smaller, lower-cost scanners and systems. Those efforts increased the volume of users and provided even more incentive for improvement. The development of the semiconductor laser diode resulted in inexpensive, handheld, lightweight scanners.

Today, bar codes have become so commonplace that it is almost impossible to find a mass-market product or even a customized product without one. There are many third-party vendors and consultants (such as Simply Barcodes, Reference 5), who help large and small vendors obtain and register an assigned code, and take care of all associated technical and business issues.

One additional advantage of bar codes is that they can be easily custom printed on demand using today's low-cost, high-quality printing technology (for example, to put labels on a blood-sample vials or even a hospital patient wristband). They are not restricted to being printed as part of a product's factory label or packaging. Further, the code can be read visually, if needed, because the corresponding digits are printed under the bars.

The basic concept of printed bar codes has been extended to custom two-dimensional codes which contain more information in designated fields. This allows shippers like FedEx and UPS to identify the package source, destination, and other vital information, scan it all on the package-handling conveyor lines or the truck, and track package status while in transit.

A competitor to the printed bar code is RFID (radio frequency identification), which uses a wireless electronic tag powered by the RF energy of the scanning system. As a result, either no battery is required (passive RFID) or the device has its own battery (active RFID).

RFID tags are successful in some market niches. Longer-range systems, for example, are widely used in motor vehicles for toll-charging systems, replacing cash toll lanes and even license-plate scanners which use optical character recognition (OCR). Also, the tags can be sensed invisibly and so are valuable for catching shoplifters. As a result, they are often attached to higher-value products.

RFID also can work where the optical nature of bar codes is a weakness: an RFID system replaced the larger-format barcode system, which railroads used for a few years in the 1980s to track every freight car on the move, and where the dirt, rust stains, graffiti, and weather conditions made the bar code system unreliable.

Further, in some advanced RFID systems, the data which the tag contains can be updated in use and can convey information such as the package temperature with a specially designed tag.

However, even a basic short-range RFID tag costs around 10 cents, compared to the zero cost of a bar code printed on a product or the trivial cost of printing one on-site as needed. For mass-market applications, the basic printed bar code and laser-based scanner form a robust, inexpensive, and reliable system.

Despite the long and largely unproductive period between prototype and adoption, Woodland lived to see his idea become an unimaginably ubiquitous success that transformed the entire worldwide supply chain (his inventor partner Silver died in 1963 at age 38). In 1991, Woodland was awarded the National Medal of Technology by President George H. W. Bush for the invention of bar codes.